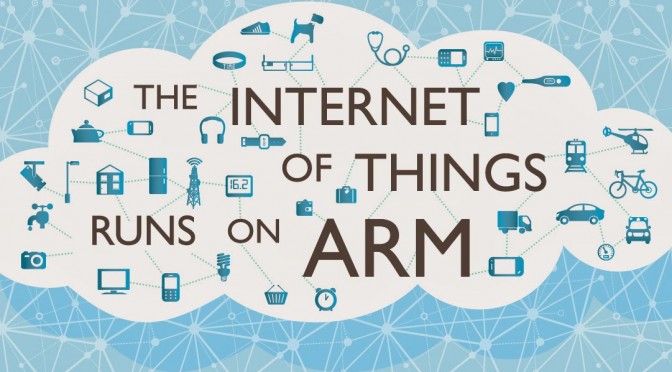 ARM, the British microprocessors company whose disruptive business model is based on targeting emerging markets and licensing its IPs to partners rather than manufacturing its own devices, has disrupted the classical approach to this business established more than 30 years ago by Intel and other microprocessor manufacturers.

This article will briefly examine the implications, for both ARM and its main competitor, Intel, of such a disruptive business model.

ARM Ltd. was founded in 1990 as a joint venture among Apple (the Cupertino’s firm was interested in a low-power microprocessor for its new Newton “Personal Digital Assistant”), Acorn (the manufacturer of computers that had previously developed the ARM IP core) and VSLI Technology (company that provided the design tools).

When the Apple’s Newton Personal Digital Assistant venture failed, ARM’s CEO decided to grow the business by licensing the ARM processor to semiconductor companies for an upfront fee and then royalties on production. In this way, ARM started to feed an ecosystem of partners (most of them System on Chip, SoC, manufacturers) interested in providing processing capabilities to their SoCs, but without the time, knowledge and capital needed to develop their own microprocessors.

On the other hand, ARM also started to work with third party suppliers in order to provide the tools and software (such as operating systems, assemblers, compilers, debuggers, development platforms, etc.) that are necessary to support the ARM architecture.

This was the seed of an ecosystem, based on an affordable, flexible, simple and low-power processor, which fostered the development of emerging markets such as the smartphone market or the Internet of the Things (IoT).

“The Ecosystem Company” of the IoT Era

In the same way that Intel, with the collaboration of IBM and Microsoft, established the foundations of the PC ecosystem in the 80s, today ARM has become one of the key pieces of the Smart Devices ecosystem. However, whereas in the PC ecosystem Intel and Microsoft exerted their power as central players over smaller firms in order not only to assure alignment and coordination within the PC ecosystem, but also to get higher margins acting as effective monopolistic firms (the “Wintel” duopoly), ARM leads an ecosystem where both capital investment and profits are shared more equally among all the players [Moore].

According to the framework proposed by Prof. Cusumano in “Staying Power” [Cusumano], the strengths of the ARM strategy are based on the following points:

The Advantages of Being a Small Firm: Judo Strategy

ARM is not comparable to its main competitor, Intel, neither in terms of market capitalization nor in terms of profits. This makes sense with the ARM strategy: ARM, unlike Intel, is an IP provider, not a semiconductor manufacturer, and do not have to invest heavily in very expensive plants. However, this fact also has implications in the profits of each company: Whereas ARM has to share the created value with its partners (those who integrate ARM cores in their SoCs and manufacture the final semiconductor), Intel is more vertically integrated, being able to capture a bigger piece of the created value. According to the framework provided by the Prof. David Yoffie and Mary Kwak in their book “Judo Strategy” [Yoffie], such a strategic positioning of ARM can be explained in the following terms:

Intel: The Inertia of a Big Player

In the ARM versus Intel discussion, it is very important to consider the historical strategic position and the culture of Intel. Led currently by Brian Krzanich, a manufacturing expert inside the company, Intel is committed to leverage its technical and scientific expertise to create cutting-edge technologies (such as the 3D transistors) to further improve the speed and integration of its semiconductors, and its state-of-the-art foundries to produce third parties chips.

Using some of “the innovator’s dilemma” [Christensen] concepts, Intel’s internal structure, resource allocation and current customers’ focus make difficult for the firm to successfully address new business opportunities in emerging markets. In this regards, Intel has failed to implement the two possible options available for an established company to face the competition of a new entrant like ARM [Markides]:

(Image from the ARM’s Google+ page)